So I’ve written about crutch words before. On my last manuscript, weeding out crutch words was my final step before querying agents. I decided to address them much earlier in the process this time, while I was waiting for feedback from my first round of readers. I realize that I’ll be making significant changes to the manuscript, but I expect I’ll be much more aware of my word choices as I revise, so I don’t think it’s too early in the process.

Because I was in waiting mode instead of anxious to start querying, I went much more in-depth with this step than previously, and although it was a tedious process, I know the manuscript is stronger for it. As before, I started by creating a Wordle: 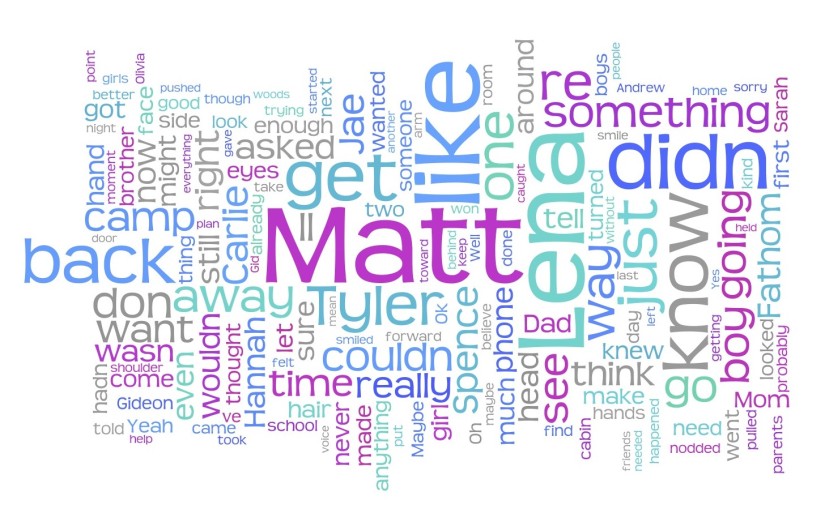 Next, I set my Scrivener window to show the full manuscript as a continuous document. Starting with the largest words that weren’t proper names, I searched for each word individually. I love the way Scrivener highlights them so I can just page down. It’s easier to see when the words occur in close proximity than, say, using the find function in Microsoft Word. Here are the words* I covered:

back, get, didn’t/don’t, something, like, know, just, could/couldn’t, away, way, one, time, really, go/going, want, was/were, would, right, need, think

These are the words I instinctively write in a first draft. Sometimes they’re the right words, but often there are stronger words that could take their place and convey the same meaning more powerfully. The tricky thing about crutch words is that you don’t want to strip them entirely or it can strangle your voice.

Because I was doing a word search instead of reading chronologically, I was forced to consider each word carefully in the context of who was saying/thinking it. Often a synonym would work in the context, but I still had to consider whether it was appropriate for the character. I asked myself questions like:

By the end of the process, I felt confident each of my characters had a more unique voice, and I also cut 1,000 unnecessary words from the manuscript. Interestingly, as I got down to the smaller words, I sometimes found a word I’d swapped out earlier (i.e., “need” instead of “want”) and decided the original word really was the best choice. The nice thing about doing this earlier in the process is that I will be reading through the manuscript several more times, and I will be much more alert to these particular words and how they relate to the character involved.

How do you eliminate crutch words? Do you struggle with the same words I do?

Other posts in this series:

*You may notice I held off on words related to body parts–head, eyes, see, hand, etc. That’s because I plan to go through and analyze my beats separately. I recently purchased “The Emotion Thesaurus,” so I’m hoping that will help me clean those up.

9 thoughts on “How I Tackle Revisions: Crutch Words”

Maggie is having an Elle Woods kind of day when she shows up for a date expecting Theo to ask her to the prom and he dumps her instead 😭😭😭. And like Elle, she will do anything to get him back, including clicking on a link from an unknown number that allows her to relive the day they met…
Happy Cyber Monday! Here are a few books you might want to order today, and you can read more about them on my blog:
It’s my birthday! I know the audio is slightly off because it didn’t download correctly from that other app but, you know, I’m just enjoying my day 🥳. Now I’m off to see the new Knives Out movie with my family.
Sometimes book research = reading every card in the Apples to Apples box. But in addition to being pertinent to this future project, I discovered Apples to Apples is a great exercise for character development!