When I first read the description for Rajani LaRocca’s MIDSUMMER’S MAYHEM during PitchWars in 2017, I was immediately intrigued–and so were an agent and editor. I mean, baking + Shakespeare’s A Midsummer Night’s Dream; what’s not to love? The book released last month, and I picked it up right away, devouring it in a couple of days (yes, total food pun). Rajani graciously agreed to an interview here and has also offered up a copy of the book for one lucky winner (details at the bottom). But first, for those of you who haven’t heard about the book yet, here is the gorgeous cover and description.

Eleven-year-old Mimi dreams of winning a baking competition judged by her celebrity chef idol. But she loses her best helper when her food writer father returns from a business trip mysteriously unable to distinguish between delicious and disgusting. Mimi follows strangely familiar music into the woods behind her house, meets a golden-eyed boy, and bakes with him using exotic ingredients they find in the woods. Then everyone around her suddenly starts acting loopy.

Squabbling sisters, rhyming waitresses, and culinary saboteurs mix up a recipe for mayhem in this Indian-American mashup of A Midsummer Night’s Dream and competitive baking.

Here are Rajani’s answers to questions about the five things I loved most.

1. I love how you wove Shakespeare’s A Midsummer Night’s Dream (my favorite of his plays!) into MIDSUMMER’S MAYHEM, particularly how Mimi’s older brother was starring in the play so that explaining it to the reader was so seamless. When you first conceived the idea of mixing Shakespeare and baking, was it clear to you that incorporating the play within the story was the way to go, or did you have to work to get to this solution?

I figured that most young readers (and many adult readers!) wouldn’t be familiar with A Midsummer Night’s Dream, so I knew I’d have to explain the story in order to set the stage properly, so to speak. When I first conceived of my book, I knew that Mimi’s older brother would acting be in a production of the play and that Mimi would learn about it through him. The challenge for me was to keep the references relatively short and interesting while still giving readers a taste of Shakespeare’s humor and beautiful language, and to allow Mimi to learn about the most important components of the play at different times. One of my favorite scenes in MIDSUMMER’S MAYHEM involves two characters hurling Shakespearean insults at each other; it was so much fun to write!

2. I also love Mimi’s family and how you implemented the story lines of A Midsummer Night’s Dream within the love lives of her siblings—although my favorite was probably Henry and how technology played a part in his, er, love story. Shakespeare would have loved it :). How did you go about modernizing Shakespeare for a middle grade audience?

One of the most appealing aspects of Shakespeare’s plays is how he captured universal emotions. The conflicts of A Midsummer Night’s Dream—between friends (two of whom are as close as sisters), between parent and child, and between men and women—are echoed in MIDSUMMER’S MAYHEM, as is the idea of magic unintentionally gone awry. But my book, while it is inspired by Shakespeare’s play, isn’t a straight retelling. I envisioned MIDSUMMER’S MAYHEM as more of what might happen after Shakespeare’s play was over. I wondered how the fairies would act now, and how they’d seem to a modern-day girl. That’s how I brought Shakespeare’s story into our world and made it relevant to kids today.

3. I’ve read a lot of books that include baking, but Mimi’s approach was  completely unique, with the use of herbs and spices you don’t usually think about for pastries. What was your inspiration for her creations?

I love using herbs and spices in cooking, and as I’ve become a more confident baker over the years,

I’ve tried to introduce the same types of adventurous flavors into my baking, too. Like Mimi, my ultimate inspiration was to take other desserts, including some favorites from my own childhood, and turn them into baked treats.

4. I loved the two main friendship story lines–and I don’t want to spoil either of them–but it would be great if you could speak a little to how you approached writing realistic friendships for this age, when it’s often hard to find confidence in your friendships.

Middle grade readers are in that in between space where they are still really connected to their families, but they are also growing more independent and navigating friendships without the help of their parents. They are figuring out who they are and what they believe in and making their own decisions about right and wrong, but they are still at the mercy of the adults in their lives, and they often have no say in those adult decisions. In writing this story, I went back to how it felt as a kid to have a best friend, lose that friend, and go about the painful business of finding your way forward. There’s also a tension between being vulnerable to new friends and holding back out of fear of getting close to someone who might hurt you—and I also tried to portray that in MIDSUMMER’S MAYHEM.

5. I loved the portrayal of Mimi’s family and how she felt a bit lost within their success and yet during the book she was finding her place with her siblings, and it was clear they loved her. What tips do you have on writing strong and nuanced family relationships?

I knew from the beginning that Mimi’s family was a happy family with a lot of love, so I started with that foundation. I also know that there is competition, misunderstanding, and strife in even the happiest relationships. I played that up as much as I could, with the parents and the older siblings being so preoccupied with their own pursuits that it was easy for Mimi to feel a bit forgotten, and to be the only one who notices that there is something really wrong with her dad.

Thank you so much, Rajani! 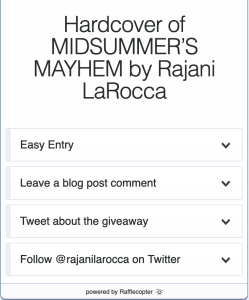 Definitely go pick this book up. Not only did I love the book, but my 11-year-old son read it within 24 hours, even choosing it over watching a movie. If that isn’t a glowing recommendation, I’m not sure what is :).

Rajani is also offering a copy of the book to one lucky winner. To enter, leave a comment below or click on the Rafflecopter for additional entries. The giveaway will close at 12 a.m. on Monday, July 15.