It’s time for another young adult reading roundup! Between series (how do you make a plural of a plural??) I love ending, attending NESCBWI, and winning a giveaway with several books, my to-be-read pile is so tall I’ve resorted to letting random.org choose what I’ll read next. As I was updating the reading tab on my blog, I realized there were several books I’ve read recently that I really should highlight with a post. But first, I could still use some input about how to label my current manuscript. If you have a minute to check out my post and give me some thoughts, I’d really appreciate it! Now on to the mini-reviews!

First up, LET THE WIND RISE by Shannon Messenger. I reviewed the first book in the series, LET THE SKY FALL, in 2013, and covered the second book in another roundup. I thoroughly enjoyed the final book in the trilogy–but then, I love everything Shannon Messenger writes, so no surprise there! I read this book in a day and a half, mainly because every chapter was a total cliffhanger.

Vane Weston is ready for battle. Against Raiden’s army. Against the slowly corrupting Gale Force. Even against his own peaceful nature as a Westerly. He’ll do whatever it takes, including storming Raiden’s icy fortress with the three people he trusts the least. Anything to bring Audra home safely.

But Audra won’t wait for someone to rescue her. She has Gus—the guardian she was captured with. And she has a strange “guide” left behind by the one prisoner who managed to escape Raiden. The wind is also rising to her side, rallying against their common enemy. When the forces align, Audra makes her play—but Raiden is ready.

Freedom has never held such an impossible price, and both groups know the sacrifices will be great. But Vane and Audra started this fight together. They’ll end it the same way.

I totally thought I wrote a review of LADY RENEGADES, the final book in the Rebel Belle series by Rachel Hawkins, but apparently not. You can read my short review of REBEL BELLE and my longer review of MISS MAYHEM. I loved how Rachel Hawkins wrapped up this series, and I have to admit I was a little concerned it wouldn’t be possible. Well done!

Just as Harper Price starts coming to terms with her role as David Stark’s battle-ready Paladin, protector, and girlfriend—her world goes crazy all over again.

Overwhelmed by his Oracle powers, David flees Pine Grove and starts turning teenage girls into Paladins—and these young ladies seem to think that Harper is the enemy David needs protecting from.  Ordinarily, Harper would be able to fight off any Paladin who comes her way, but her powers have been dwindling since David left town…which means her life is on the line yet again.

I gushed about The Selection series earlier this year, but I held off on reading THE HEIR until I could also read THE CROWN. I’m so glad I did because I sure hate waiting for a finale :). I also picked up HAPPILY EVER AFTER and enjoyed reading the novellas that go along with the original series. I wonder if Kiera Cass will do some of those for the second-generation characters. 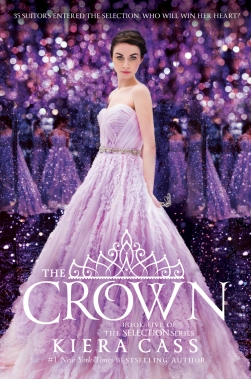 When Eadlyn became the first princess of Illéa to hold her own Selection, she didn’t think she would fall in love with any of her thirty-five suitors. She spent the first few weeks of the competition counting down the days until she could send them all home. But as events at the palace force Eadlyn even further into the spotlight, she realizes that she might not be content remaining alone.

Eadlyn still isn’t sure she’ll find the fairytale ending her parents did twenty years ago. But sometimes the heart has a way of surprising you…and soon Eadlyn must make a choice that feels more impossible—and more important—than she ever imagined.

I’ve enjoyed several books by Sarah Mlynowski, especially her Whatever After series for younger readers, so I was excited when I won a copy of DON’T EVEN THINK ABOUT IT. Just the concept of a group of kids getting ESP from a flu shot is intriguing, but the way she executes it with a first person plural POV is fantastic.

We weren’t always like this. We used to be average New York City high school sophomores. Until our homeroom went for flu shots. We were prepared for some side effects. Maybe a headache. Maybe a sore arm. We definitely didn’t expect to get telepathic powers. But suddenly we could hear what everyone was thinking. Our friends. Our parents. Our crushes. Now we all know that Tess is in love with her best friend, Teddy. That Mackenzie cheated on Cooper. That, um, Nurse Carmichael used to be a stripper.

Since we’ve kept our freakish skill a secret, we can sit next to the class brainiac and ace our tests. We can dump our boyfriends right before they dump us. We know what our friends really think of our jeans, our breath, our new bangs. We always know what’s coming. Some of us will thrive. Some of us will crack. None of us will ever be the same.

So stop obsessing about your ex. We’re always listening.

You know those books everyone LOVES that you hesitate to read because you’re afraid you won’t love them, too? Oh, maybe that’s just me. Actually, it doesn’t happen all the time. Often I’ll know from the description that I’m going to adore the book, but sometimes there’s so much hype I’m afraid I’ll be disappointed–because it’s happened a few times. That wasn’t the case at all with THE STATISTICAL PROBABILITY OF LOVE AT FIRST SIGHT. I expected a love story, but I got so much more. I don’t want to give too much away, but this book made me tear up, and that is not easy to do. (Just ask my husband. I don’t even cry at funerals.) Today should be one of the worst days of seventeen-year-old Hadley Sullivan’s life. Having missed her flight, she’s stuck at JFK airport and late to her father’s second wedding, which is taking place in London and involves a soon-to-be stepmother Hadley’s never even met. Then she meets the perfect boy in the airport’s cramped waiting area. His name is Oliver, he’s British, and he’s sitting in her row.

A long night on the plane passes in the blink of an eye, and Hadley and Oliver lose track of each other in the airport chaos upon arrival. Can fate intervene to bring them together once more?

Quirks of timing play out in this romantic and cinematic novel about family connections, second chances, and first loves. Set over a twenty-four-hour-period, Hadley and Oliver’s story will make you believe that true love finds you when you’re least expecting it.

That’s all I have for today. Have you read any of these books? What did you think? Do you have any other reading suggestions for me based on the above?

Made another trip to the library this morning, and my pickup included one 2021 debut I’ve had on my TBR for a year. So excited to dive in! What’s on your TBR?
One week until Town and Country Symphony Orchestra’s final concert of the year! Featuring Saint Louis Symphony Orchestra's Assistant Concertmaster Erin Schreiber playing the Barber Violin concerto, as well as the orchestra playing Shostakovich’s 5th Symphony and the Bach Double with the SIUE Suzuki Tour Group. The concert is free. Details on when and where below 😊.
Today marks 4 months until the release of MY SECOND IMPRESSION OF YOU, so it’s time for another backstage look!
Oh, hi there! I had a totally crazy weekend, and yesterday was my daughter’s 12th birthday, so I kind of disappeared for the past several days. So here’s a random teaser from YOUR LIFE HAS BEEN DELAYED. It’s from Jenny’s first day of school.